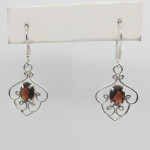 Garnet is the birthstone for January and the gem for the second anniversary.

One myth surrounding the origins of garnet suggests that Persephone, the Greek goddess of sunshine, was captured by Hades, the god of the underworld. Hades eventually released Persephone, but not before he offered her some pomegranate seeds, which guaranteed her return to him.

One glance at the deep red seeds nestled inside of a pomegranate fruit explains why the word "garnet" comes from the Latin word "granatus," meaning "grain" or "seed." This name was given to the garnet because of its close resemblance to the succulent pomegranate seed.he birthstone for January and the gem for the second anniversary.

Please be aware that due to differences in monitor settings, color may vary slightly.

There are no reviews for this product.
Write a review
BadExcellent
Verification code *