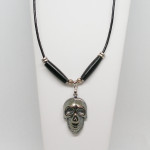 From the Greek, haimatites, “bloodlike” in allusion to the red colour of powdered Hematite. In ancient times it was believed that large deposits of hematite formed on battlegrounds where soldiers were injured and lost blood from their battles.

NASA has discovered that hematite is one of the most abundant minerals in the rocks and soils on the surface of Mars. An abundance of hematite in Martian rocks and surface materials gives the landscape a reddish brown color and is why the planet appears red in the night sky.

Hematite has a long history of use as a pigment. As a gemstone, this material is most often carved. Despite its association with blood and the color red, hematite’s color can range from black and metallic gray to brownish red in thin slivers or crystals.

Hematite is believed to have a very strong grounding energy. It also has a cooling and calming effect and is said to help develop concentration and focus.

Please be aware that due to differences in monitor settings, color may vary slightly.

There are no reviews for this product.
Write a review
BadExcellent
Verification code *